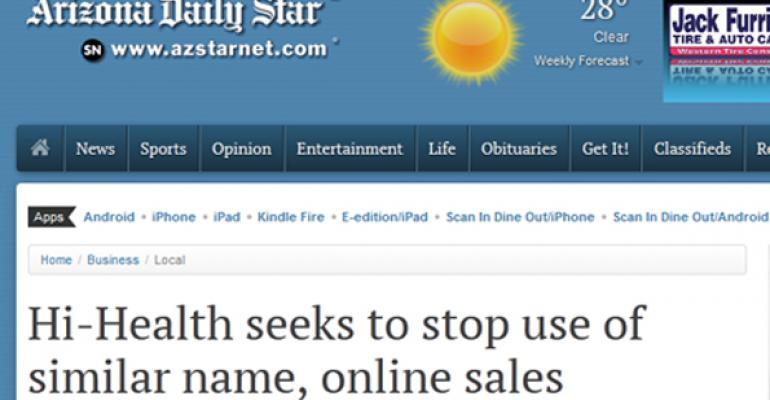 An Arizona natural foods retailer seeks to block a Connecticut-based supplement company from using its current domain and selling products similar to the bricks-and-mortar-based store.

Hi-Health, which has 46 stores, filed suit against i-Health, a division of the Netherlands-based Royal DSM, according to an Arizona Daily Star report.

Marvin Glazer, an attorney for Arizona's Hi-Health Supermart Corp., wants U.S. District Judge Bridget Bade to order i-Health to stop selling similar items online. He also wants the company, based in Connecticut, to stop using its "i-healthinc.com" website or anything that would be confusing with Hi-Health's Internet site.

Glazer is also asking Bade to require i-Health to account for the profits it has made and turn them over to the Arizona firm.

Royal DSM manufactures products such as Culturelle, which Hi-Health sells. But, Hi-Health claims the i-Health designation is new and "confusingly similar" to the Hi-Health trademark, the newspaper reported.

Read the complete story about the name conflict in the Arizona Daily Star.