HomeNewsOmega-3s suppliers dispute conclusions of forage fish report
Recent
Latest
4 tips to get ahead of chemical concerns in packaging
May 20, 2022
7 CBD favorites in the increasingly popular gummies format
May 20, 2022
Mission MightyMe helps parents introduce allergens to babies
May 20, 2022
UNFI's Eric Dorne to step down as chief operating officer
May 20, 2022
Trending
Whole Foods' honors 30 companies with 10th annual Supplier Awards
May 18, 2022
Sponsored Content
The rise of sustainable business – eGuide
Sponsored Content
Getting ready for 2023: Trends for brands to consider
May 17, 2022
Sponsored Content
Unboxed: 7 plant-forward ice creams to stock this summer
May 10, 2022 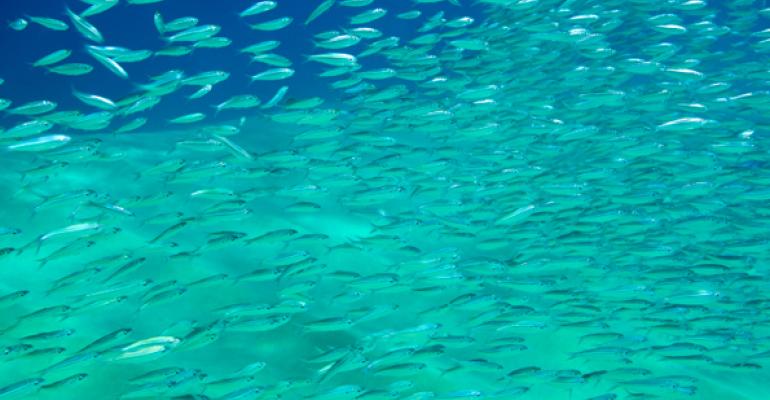 A report from a fisheries task force recommends cutting the worldwide forage fish harvest in half.&nbsp; Sources familiar with the species mentioned in the report that supply omega-3s&mdash;anchovies, menhaden and krill&mdash;dispute the report&#39;s conclusions and say there is enough information to operate these fisheries sustainably.

A recent report from a fisheries group has been making waves in the omega-3s sector. The report issues a blanket call for the worldwide harvest of forage fish to be reduced by half. These little fish supply the vast majority of the omega-3 ingredients on the market.

The report, called “Little Fish Big Impact,” was issued by the Lenfest Forage Fish Task Force. The group is chaired by Professor Ellen Pikitch of the School of Marine and Atmospheric Sciences at Stony Brook University, N.Y. The task force includes 15 academics from the United States, Australia, Canada and France.

“The approach we have been taking to these fish is pretty myopic,” Pikitch said. “We have been treating them as if they were like any other fish in the sea, and in fact they play a crucial and unique role in marine ecosystems.

“They are able to feed on plankton, which few fish can do for their entire lives. They transfer energy from the bottom of the food web all the way up to the top. They also play a really important filtering role.”

Companies that supply omega-3 ingredients from forage fish are fond of mentioning the benefits of sourcing ingredients from this category of marine life. These fish (lump krill in here) are short-lived and reproduce readily. They’re also cleaner because they're low on the food chain with less risk of bioaccumulation of toxins in their flesh. And finally, omega-3 suppliers can forgo targeting predator species like tuna or cod which naturally are fewer and take much longer to grow to adult size.

“All else being equal that’s a good thing to do,” Pikitch said. “But you’ve got to look at the big picture. The big picture is you still can’t take too many.”

Adam Ismail, executive director of the Global Organization for EPA and DHA Omega-3, noted that the report looked at more than 40 forage fish fisheries around the world, but only three of those are involved in the production of omega-3s—the Peruvian anchovy fishery, the harvest of menhaden in Chesapeake Bay and the harvest of krill in Antarctica.

“What’s interesting is that they didn’t weigh the fisheries by their volumes. They weighted each fishery equal and that’s how they get to the general conclusion that you need to reduce by half the amount of fish being captured in these forage fisheries,” Ismail said.

“But Peruvian anchovies is by far the biggest forage fish fishery in the world,” he said. “And they didn’t identify a lot of issues there except that there are some bird populations that are stable now but they would like to see recoveries in them over time.”

Ismail said the issue with avian predator species has already been recognized by fishery managers in Peru, and the bird population has been monitored for a long time.

The report did contain some good recommendations, Ismail said, such as identifying overall biomass targets for individual fisheries. But he said the information presented did not warrant 50 percent catch reductions.

What it takes for a fishery to be sustainable

The report set out a three-tier system—low, intermediate and high—for evaluating fisheries, based on how much is known about each species and its ecosystem.

“The main principle we used was the less you understand, not just about the forage fish itself but about the ecosysems it lives within, the more cautious you need to be,” Pikitch said. When much is known about the species and its ecosystem, a more aggressive fishing approach could be taken.

The report does not spell out which fisheries fit in which tier. But Pikitch did say that the task force members believe that the fisheries that are considered well managed—the companies engaged in the harvesting of anchovies, menhaden and krill say they are—the level of knowledge is intermediate at best because total ecosystem information is lacking.

Prikitch said the basic message is this: In the low information sphere, if there is no fishery, don’t start one until you assemble enough information to get yourself into the intermediate tier. If a low-information fishery does exist, keep harvests at 20 percent of unfished biomass until more is known. Once you have enough info, you can advance to taking 40 percent of unfished biomass in a season. And follow a flexible catch management strategy, which means cutting back your catch when stocks are lower.

“A lot of the names on the task [force] have advocated for these types of restrictions in the past,” said Ben Landry, director of public affairs for Omega Protein, which supplies omega-3 ingredients from its menhaden fisheries off the East and Gulf coasts of the United States. Omega Protein is the biggest supplier of fish oil and fish meal in North America, though their output is dwarfed by what comes out of Peru, Landry said.

“From our perspective it was nothing new. It was the same old claims by the same old interest groups,” he said.

“When we determine our level of operation, it’s largely from the guidance by the National Marine Fisheries Service. The stock assessments they conduct in the Atlantic and in the Gulf of Mexico provide us with the snapshot of the population, and how much can be removed sustainability,” he said.

Leading krill harvester Aker BioMarine has a similar story to tell. It cooperates with the Commission for the Conservation of Antarctic Marine Living Resources (CCAMLR) and has earned a Marine Stewardship Council certification for its sustainable harvesting practices.

What does the forage fish report mean for algal oils?

If the supply of fish and krill goes down, either from actual scarcity or regulatory pressure, could that prove to be a bonanza for algae? Does this report signal an accelerating shift toward vegetarian sources of DHA and EPA? Chris Lindsay, vice president of dietary supplement strategy for DSM Nutritional Products says it's unlikely, at least in the short term. DSM is in the process of fully integrating its acquisition of longtime algal fermentation omega-3 supplier Martek.

“This is frankly nothing really new,” Lindsay said. “There have been a number of reports over the years that have speculated about overfishing issues. This doesn’t surprise me.”

“All sources [of omega-3s] are good,” he said. “As the market continues to evolve I think demand will continue to grow. The science is going to continue to push the growth of the category.” In fact, a recent survey conducted by Discovery Research Group, in partnership with Aker BioMarine, revealed that nearly four out of 10 consumers who want to take an omega-3 supplement are looking for an alternative to fish oil.

Algal sources of omega-3s are significantly more expensive than their fish oil counterparts, Lindsay acknowledged, and said that ratio won’t change in the short term, even if marine sources come under supply pressure.

“Do I think there is always going to be need for a fish source? Absolutely. But I think many years down the road you could see a shift in the balance toward more algal sources,” he said.