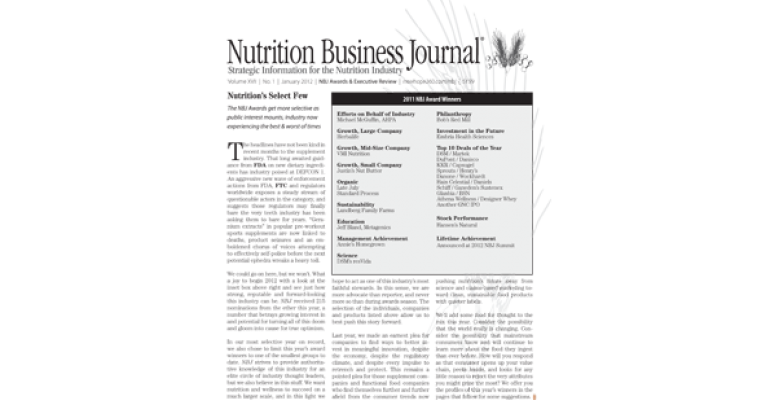 Embria wins the Investment in the Future Award for its economic impact study.

Recognizing that employees are most productive when they’re healthy, the city of Ankeny, Iowa, took part in a study last year with homegrown Embria Health Sciences to pinpoint exactly how the city would benefit if employees experienced a boost to their immune systems during cold and flu season. Instead of focusing on effective treatments for people who were already sick, the city and the company took the initiative to focus on straightforward supplementation as a means to preventative health.

Ninety participants from various city government agencies took EpiCor, Embria’s beta-glucan immune system supplement, between October and March. After analyzing the data, the city noted a 28% decline in employees’ doctor visits for cold, flu and upper respiratory illnesses, as compared with the same period the previous year. And more than 50% of employees said they felt better and experienced fewer cases of cold and flu after taking EpiCor.

Scott Steinford, president of ZMC-USA and Embria’s first vice president of sales, emphasized the company’s consistent use of clinical trials as the main reason for its strong reputation. “They were committed to scientific data from the onset and they built upon that. That, first and foremost, sets them apart from many,” he says.

The second notable outcome of the study is that the results serve as a credibility boost for the cause of integrative medicine. Sturm says that from the beginning, Embria has been a big believer in integrative nutrition, being a responsible player in the industry, and supporting the idea that things like diet and exercise in combination with supplementation really do pay off in healthcare.

“Not only is there a productivity issue and a human health issue here, but also these things really have the potential to help everyone’s healthcare costs,” says Sturm. “We’ve looked for ways from the very beginning to take that message out into the community and to do projects like this.”

And that was a large motivation behind the city of Ankeny’s participation in the first place. Deb Dyar, public relations officer for the city, calls the study a “winwin,” and she describes the benefits to the city as well as to individuals as twofold.

“Not only does it reduce medical claim costs—and subsequently healthcare costs—but it also improves employee productivity,” she says. “If they’re not feeling well and come to work, they’re not as productive and there’s the potential to make other employees sick. Or they’re staying home and they’re not productive because they’re home sick. Being able to improve those sick leave numbers was a signifi cant cost savings just in terms of productivity.”

She says the city is working on extending the program and looking for ways to provide city employees with more options to improve their health.

“The outcome for us has been a re-focus on making our employee benefit wellness plan more robust. It will likely include an option for some kind of shared cost related to EpiCor for those employees who want to continue taking it,” Dyar says. “Similar to offering a discount to a health club, we would offer an EpiCor discount to those employees who were interested in that as an option.”

City officials encourage other businesses to explore similar programs. None have formally committed to a similar program so far, but there is interest, and not only from within the city. Sturm says that several governors’ and state senators’ offices around the country have expressed interest after the assistant city manager did a presentation on the results of the study in Des Moines at the National Foundation of Women Legislators annual conference last year.

“I think the perception is that governments sometimes are not very innovative and are way behind the times when it comes to alternative ways of looking at healthcare programs,” Sturm says. “This was just a means of showing legislators from all over the country that it is possible to do something that doesn’t take a lot of time, didn’t cost very much, and paid big dividends.”