With an investment of over CHF 45 million (HUF 10 billion), the 10,000 sq.-metre factory extension—equipped with four new production lines and new pouch-packaging 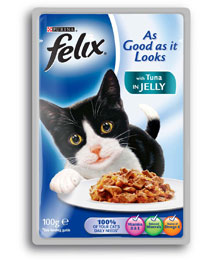 technology—now forms part of the manufacturing factory site in the Hungarian town of Bük.

The Company’s latest investment has reaffirmed its presence in Europe and looks set to enhance its drive to meet the growing demand for Purina PetCare brands in Central and Eastern Europe.

The investment has also created more than 200 additional jobs, boosting the number of employees to 600 people.

Mr. Freixe emphasized Nestlé’s vision for the region and said: "We have been operating in Hungary for more than 20 years. The Central and Eastern Europe region is a very important part of our business and this investment demonstrates our long-term commitment to business sustainability and economic development in this region.”

He also stressed the importance of Hungary’s solid infrastructure and favorable geographical location and added: “The decision to invest in Hungary was also facilitated by the country’s economic role in the region as well as its geographically advantageous location.”

Mr. Settembri continued: “It is a very important day for the history of the PetCare business in Central and Eastern Europe. The expansion of our factory in Bük is a key asset to strengthen our position in this region.”

Dr Navracsics went on to explain why Nestlé’s investment in the country is vital and said: “Any new investment creating jobs justifies the optimistic economic forecasts for Hungary. Today's factory extension opening also signals that foreign investors have trust in Hungary and are confident about the strength of our economy.”

Nestlé Purina PetCare has been a leader in the scientific advancement of pet care and pet nutrition for over 80 years. Its product range is designed to give pets and their owners the best possible choice of recipes and formats, for every life stage and lifestyle.

As a committed member of the wider pet care community, Nestlé Purina PetCare works closely with the communities in which it works and operates, while promoting responsible pet ownership worldwide.

In Europe, Nestlé Purina PetCare is present in 35 countries, operates 14 factories and employs around 5,300 people.

Nestlé began manufacturing products in Hungary in 1974, where it now operates four factories and employs around 1,650 people.

In addition to producing pet food in Bük, a factory in Diósgyőr manufactures chocolate brands including After Eight and Kit Kat.

The Company also produces powdered beverages including Nescafé and Nesquik for European markets in the Hungarian town of Szerencs. Furthermore, its bottled mineral and spring water brands Nestlé Aquarel and Theodora are manufactured in the village of Kékkút.