Although natural retailers on the whole experienced healthy growth in 2010, much of it was regional and category dependent.

Sales at Dover Healthy Alternatives in Dover, Ohio, were down about 5 percent in 2010 from a peak sales year in 2009 for the 10-year-old store, says owner Connie Ciekanski."But I'm not concerned at all, considering the economy and the fact that we had our best year ever in 2009," she adds.

This year, Dover's food sales are up and "we're seeing new shoppers in the store every day," Ciekanski says. She raises prices "every time prices get raised on me," but the store has added items such as smoothies and homemade soup that bring customers in.

Bob Burke, founder of Natural Products Consulting in Andover, Mass., says many customers who had traded down to shop at Trader Joe's or Costco, for example, are returning to higher-priced naturals retailers. In terms of product selection, "shoppers cut back on some categories of natural household cleaners and frozen entrees. The last thing they gave up were perishables and baby food," he says. "So bulk is way up and frozen food and cookies took more of a hit." (Get more of Burke's reflections on natural products retail trends.) 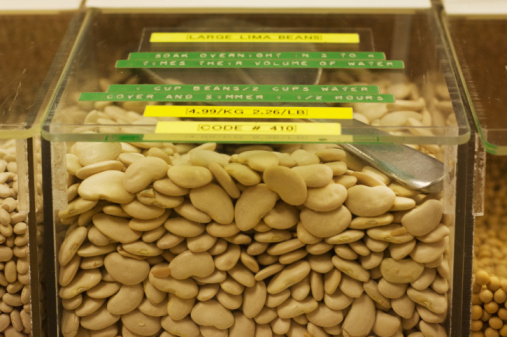 ries]. A lot of people are cooking at home rather than buying frozen or packaged food." Ongoing concerns about food safety drove "a real large increase in baby food as well." Miller expects Huckleberry's to post a slight improvement in 2011, aiming for a 5 percent to 6 percent sales increase.

Jay Jacobowitz, president and founder of Retail Insights, a Brattleboro, Vt.-based consulting service for natural products retailers, says the NFM survey results show that sales growth by department "confirms the dominance of foods. Fresh dairy and produce, at 12 percent growth and 13 percent growth, are two of the three categories in double digits." Pet products rounded out the double-digit growth list at 10 percent. 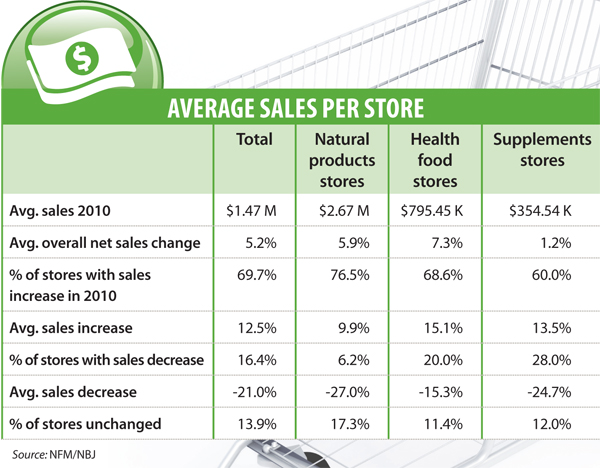 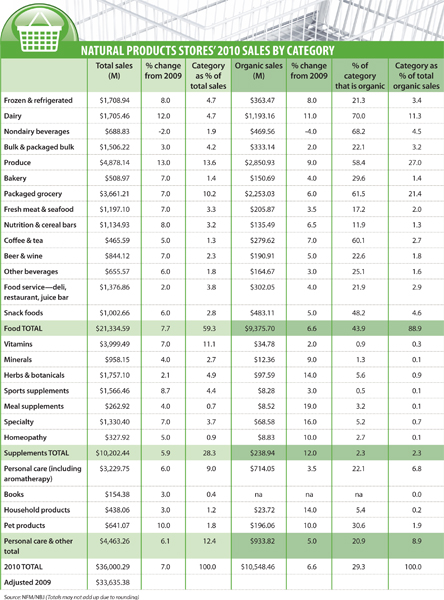